Cheap natural gas has to be one of the top stories of the year.   It is all over the press. Wall Street Journal had stories on cheap natural gas helping the rust belt, low-cost gas being the real economic stimulus, and new plants being built in the US because gas is a key input.  Supply Chain Digest’s, Dan Glimore thinks natural gas trucks will have big impact as well.

At Northwestern’s Masters in Engineering Management blog, we had a discussion on what  managers should do about this:  The simple answer is to make more products in the U.S. The more complex answer, of course, is that network modeling will help you figure out what to do.

Unfortunately, I missed CSCMP this year.  But, Dan Gilmore of SCDigest recorded an interview with T. Boone Pickens on the future of Natural Gas Trucks.

With the low price of natural gas, it is no wonder the supply chain community is starting to look at replacing diesel powered trucks with trucks running on natural gas.

The interview states that the the cost of a gallon of Liquefied Natural Gas (LNG) is about $2.80 compared to about $4.50 for diesel.  I don’t know if both types of vehicles get the same miles per gallon and have the same capacity, but assuming they are comparable, this is a significant drop in the cost per mile.

With a much lower cost per mile, this means that transportation becomes less expensive relative to warehouses and inventory and the difference between truck and rail decreases. Both of these trends should push you to need fewer warehouses.

In the short-term, without a network of fueling stations, it may also mean you design your network so that you can take advantage of natural gas by locating warehouses where you can access LNG.

In any case, this is just one more reason for staying on top of the design of your supply chain.

Network design is not just driven by transportation costs.

Yesterday’s Wall Street Journal article about an Egyptian firm investing $1.4 billion in a fertilizer plant in Iowa.  Why Iowa?  Well, according the article, natural gas is a key raw material in fertilizer and the low natural gas prices in the US are encouraging investment.  This firm is not the only one:

Low gas prices have spurred other investments by chemical makers. Deerfield, Ill.-based CF Industries Inc., another big fertilizer producer, increased its projected capital spending on new nitrogen capacity to $2 billion through 2016, up from a prior forecast of $1 billion to $1.5 billion. Much of the capacity is expected to debut in 2015.

Dow Chemical Co.announced earlier this year it will build a multibillion-dollar plant to convert natural gas into the building blocks of plastic in Texas, creating 2,000 construction jobs before the plant is completed in 2017.

That news followed Royal Dutch Shell PLC’s announcement it would build a similar, $2 billion chemicals plant near Pittsburgh, above the Marcellus Shale.

Currently 50% of the fertilizer used in the US is imported (incurring extra transportation costs, but the article doesn’t mention how much might come from Canada).  So, with the lower price of natural gas, the balance tips in favor of investing close to the source of natural gas and demand points.

It will be interesting to see how the price of nature gas impacts other manufacturing firms. Network modeling can help a firm understand when it makes sense to take advantage of the price of natural gas and move plants to the US. 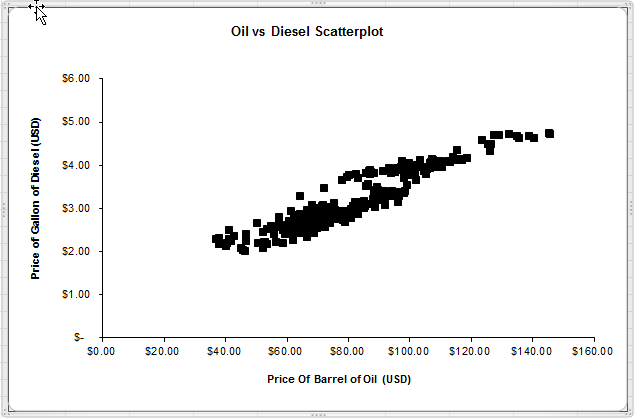 This case study as well as the links above provide a nice introduction to the impact of oil prices on the supply chain.